It takes about an hour to fly from Lima to Arequipa. We spent more time in the airport, than flying ! As the plane lands, we had a preview of Arequipa´s terrain … the Andes, some snowcapped mountains, and what seems to be like endless desert. Big cactus plants sprout from dry and arrid land. It felt blazing hot as we got out of the plane. We were met by Max, the owner of the B&B where we are staying. This couple was very helpful when I was planning this trip. They booked our domestic LAN tickets for us using their credit card, because if I book using the International website, the price of the ticket is 2x as much as the Peruvian site, which accepts only Peruvian cards. Max is Swiss, but had been living in Peru for more than 25 years now, and Lula is a native Arequipeña. They own a language school wherein the classes are held in a historical Spanish-style casa.

They have a 2 level condo in an upscale building, on a neighborhood just outside of the city center, with a magnificent view of the snowcapped Chachani mountains, El Misti, and Pichu Pichu – most specially from their rooftop terrace. So anyway, after settling in, and going through our ¨welcome orientation¨, Max dropped us off to the city center, after taking a quick tour of their language school.

We were starving, and we could smell something being grilled from the street. It was lunchtime by then, so all the people are out for lunch. We opted for a small local eatery, which had several Arequipeños seated for their lunch break from work. We wanted to get a different meal for each so we could try different dishes, but my Spanish vocabulary contains only a few verbs, and the basic what-who-when-why (which by the way gets me around quite a bit) … so .. after a few minutes of trying to explain to the waiter what we wanted, we settled for one type of set meal of lomo saltado for all 3 of us, but with different soup (which we didnt have an idea what they were). Jilly and I got caldo blanco, while Maridol got chanque for soup. It turned out to be a really delicious, hearty, simple soup which is a basic beef broth mixed with all the local ingredients available to a typical Peruvian village – meat, corn, yuca, potatoes, rice, tomato. Later on, we found out from Max that this type of soup is what the villagers typically have – and apparently, is on the much lower end of Peruvian food =). We all loved the food .. the lomo saltado with rice was a hit to all of us.

With our tummies happy, we started venturing out to Plaza de Armas. The plaza is flanked on one side by the commanding presence of Catedral de Arequipa, which is the only church in Peru which stretches the entire length of th plaza. As you can imagine, the cathedral looks like any Spanish colonial church – but on steroids =). The other 3 sides of the plaza are bordered by more colonial buildings, the bottom of which are occupied by stores and tourist offices, and the upstairs by restaurants where you can dine on the colonnaded balconies while admiring the view of the surroundings, and the snowcapped not far behind. 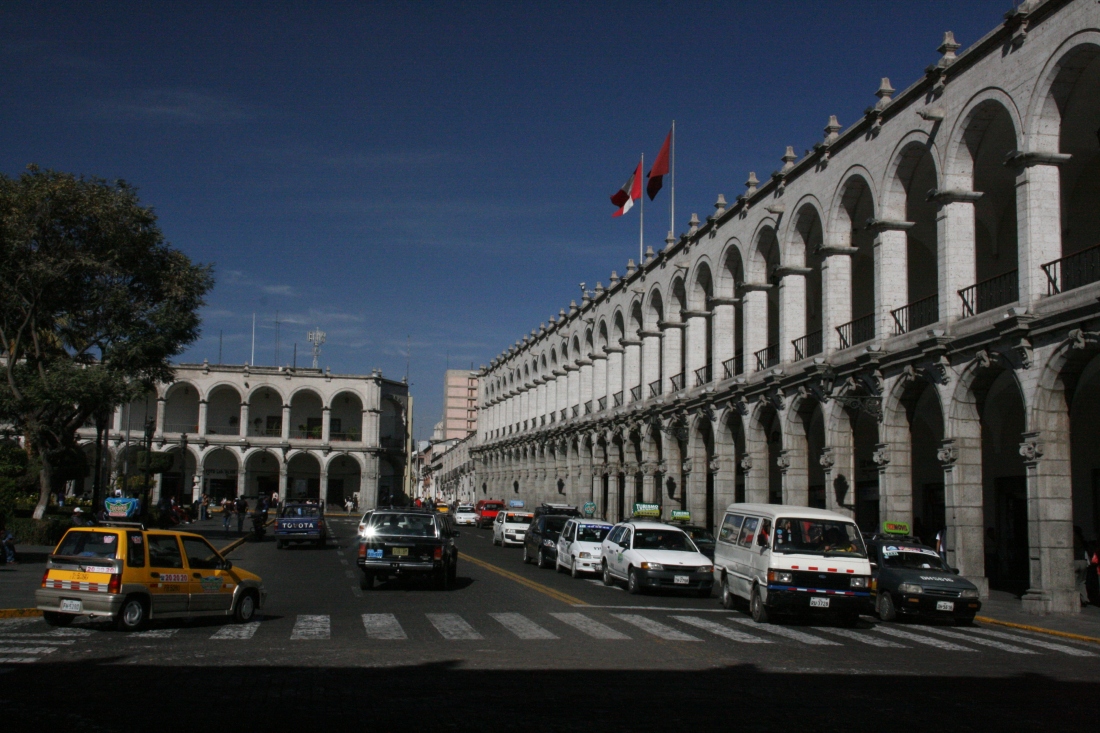 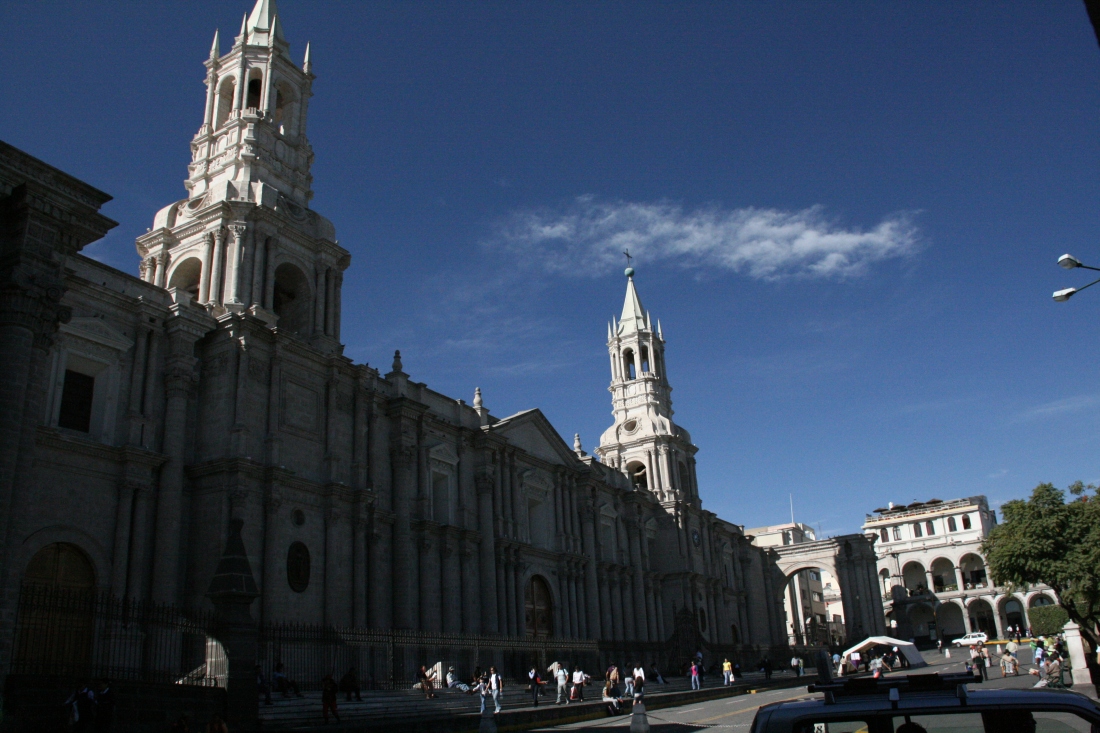 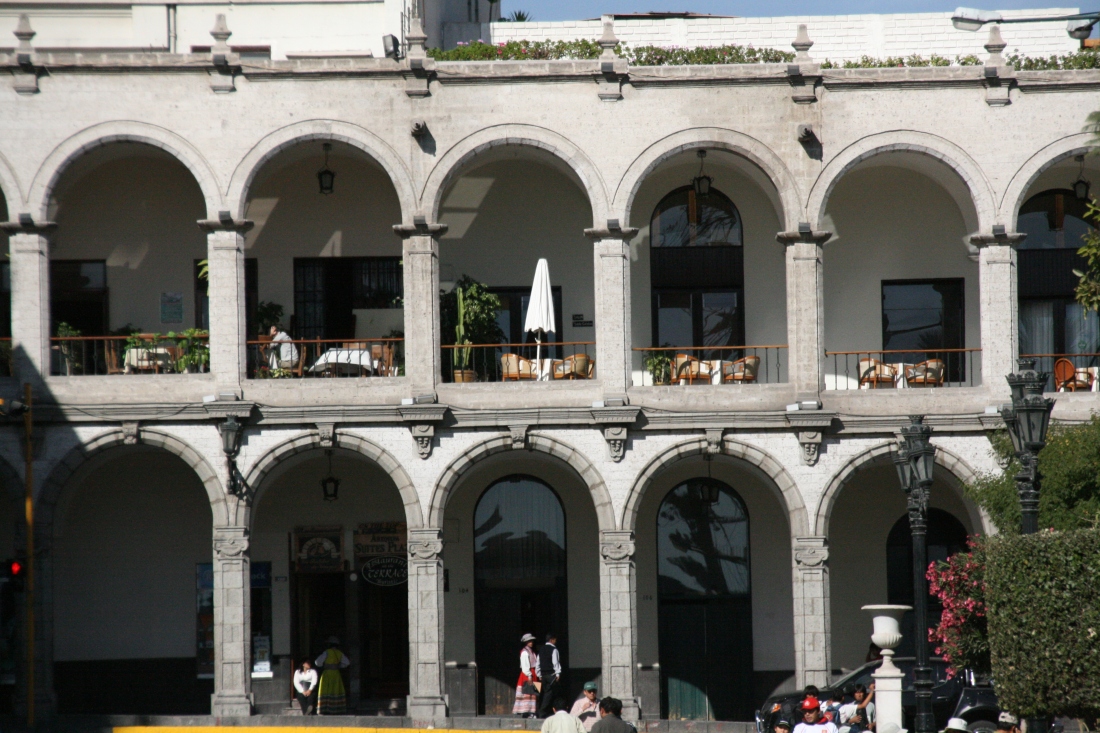 It was almost 2pm at that time so we opted to head straight to Monasterio de Sta Catalina, which is about 2 blocks away from the Plaza. Time here seems to move at a snail´s pace .. and I love it ! After having done so much and walked a hundred blocks, we would check the time and the clock had barely moved ! Ok, I´m digressing. Monasterio de Sta Catalina used to be a monastery built for rich nuns. This is the convent where the rich families in Spain would send their daughters. Each nun would have up to 5 slaves each, and would invite musicians and hold parties in the monastery. I know what you´re thinking – and of course this kind of lifestyle didn´t last since nuns are supposed to live the life of chastity, poverty, blah blah blah. Now the monastery still houses a few nuns, secluded in a small part of the monastery, while the rest is open to public. 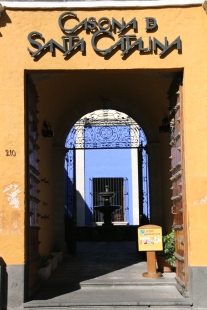 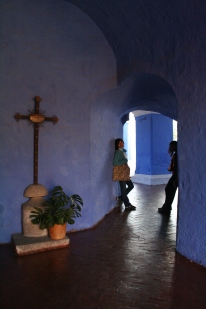 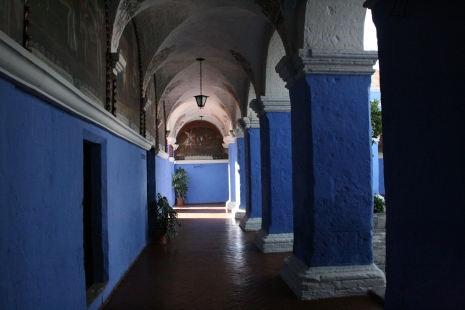 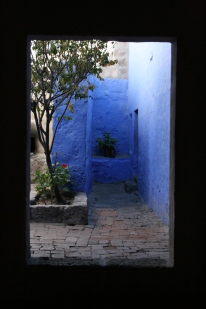 It took us almost 2 hours – or maybe even more – to go through the maze of hallways, cells, kitchens, cloisters, choir room, etc. It was like being transported back in time. The hallways feature thick arches, and the walls are either white, deep red, or blue. The white walls would have planters hanged on it, with red blooms. With the bright colors and the Spanish structure of the monastery, I wanted to take a picture of every corner, every plant, every arch, and every room. Don´t worry, I didn´t =). By the time we got out of the monastery, it was late in the day. We walked along the streets, checked out some souvenir stores, and looked for a place to just sit and have coffee. 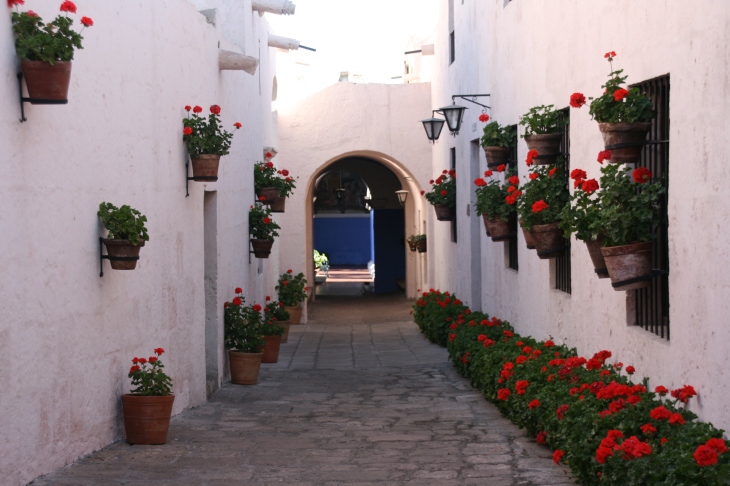 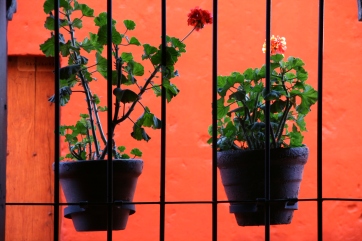 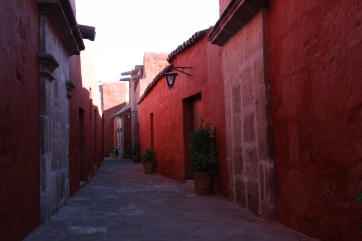 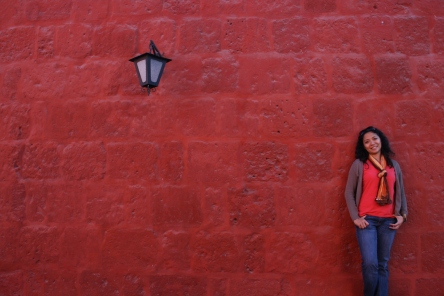 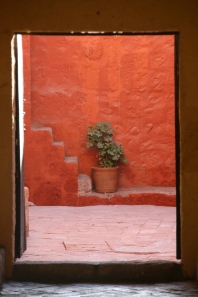 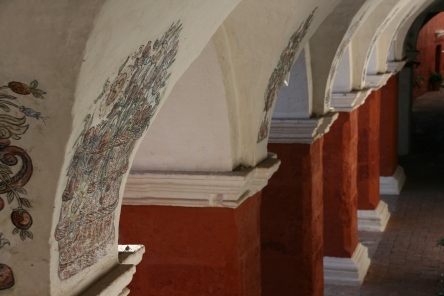 The buildings here in Arequipa are mostly white, contrasted by huge black window railings. A type of volcanic rock called sillar used to build these structures gives it the white color, and the white color gleams at a certain time of the day (hence the name, white city). 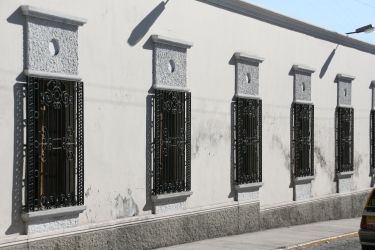 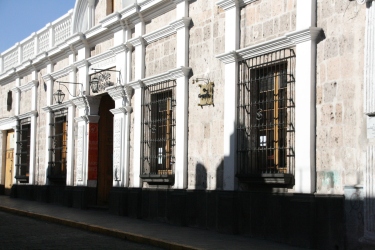 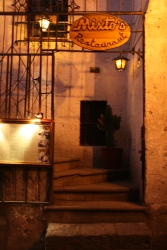 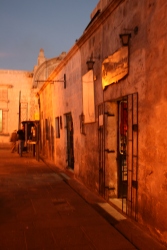 We walked through the cobblestoned streets, and found a cozy alleyway, filled with tables and chairs, illuminated by the amber light of the street lamps. We continued walking until one food display caught our eyes. Then we knew, this is where we will have our coffee. The deciding factor? Churros ! So we had coffee and churros, while looking over the menu. We decided to get some salchipapas (salchichas y papas) .. and then more coffee and churros. From the tres leches in Miraflores, to the churros here in Arequipa, I think I will need some insulin drip by the time I get home :P.

We dragged our sugar-induced-comatosed bodies through the cobblestoned-pedestrian-only street and checked out the 5-story souvenir store El Patio de Ekekok (I know, I get a kick out of the names here .. there was a chinese restaurant called Pak Fok too ). We were all exhausted, and moreso with the 7,000ft altitude, we get tired really quickly. We finally decided it´s time to go home. 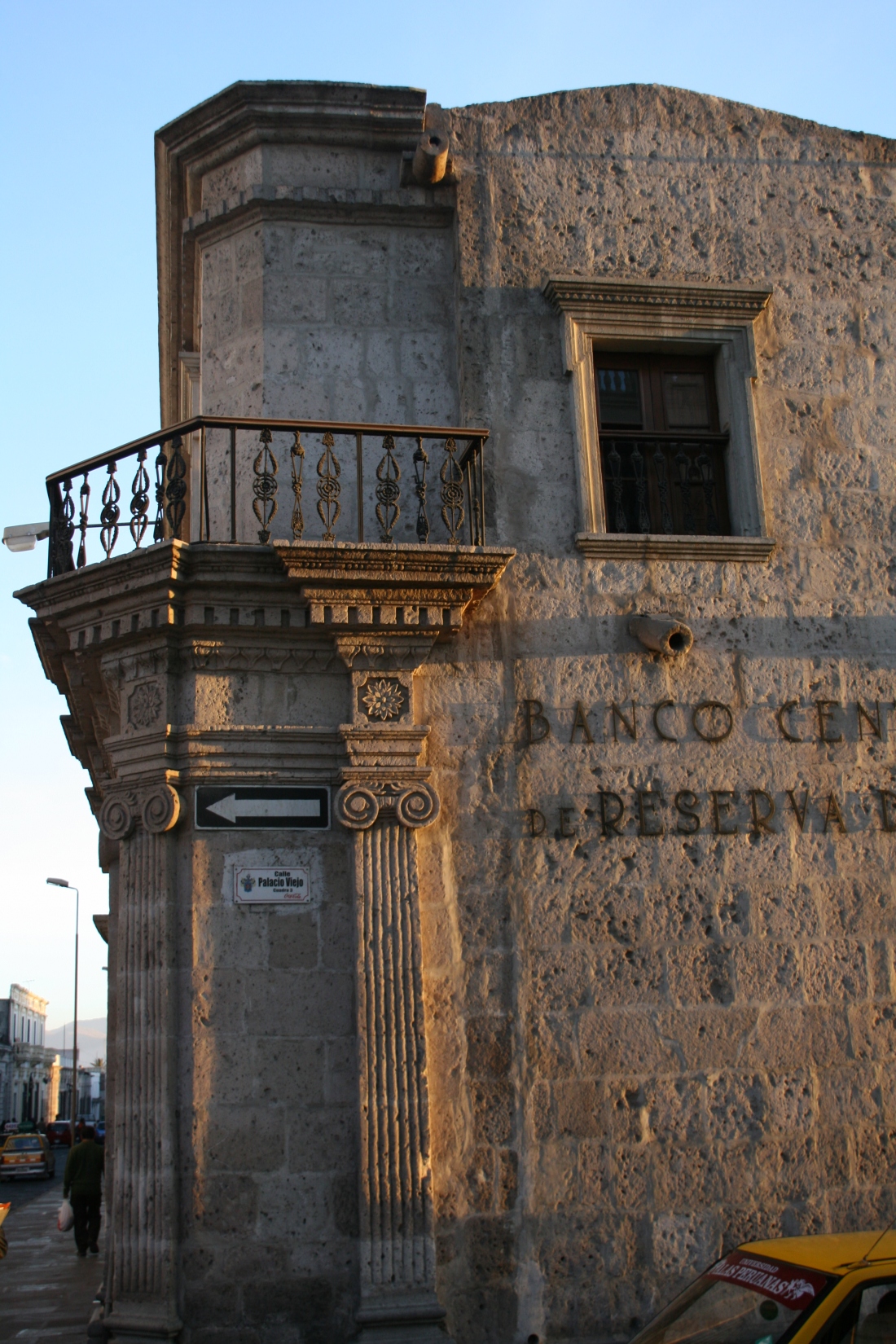 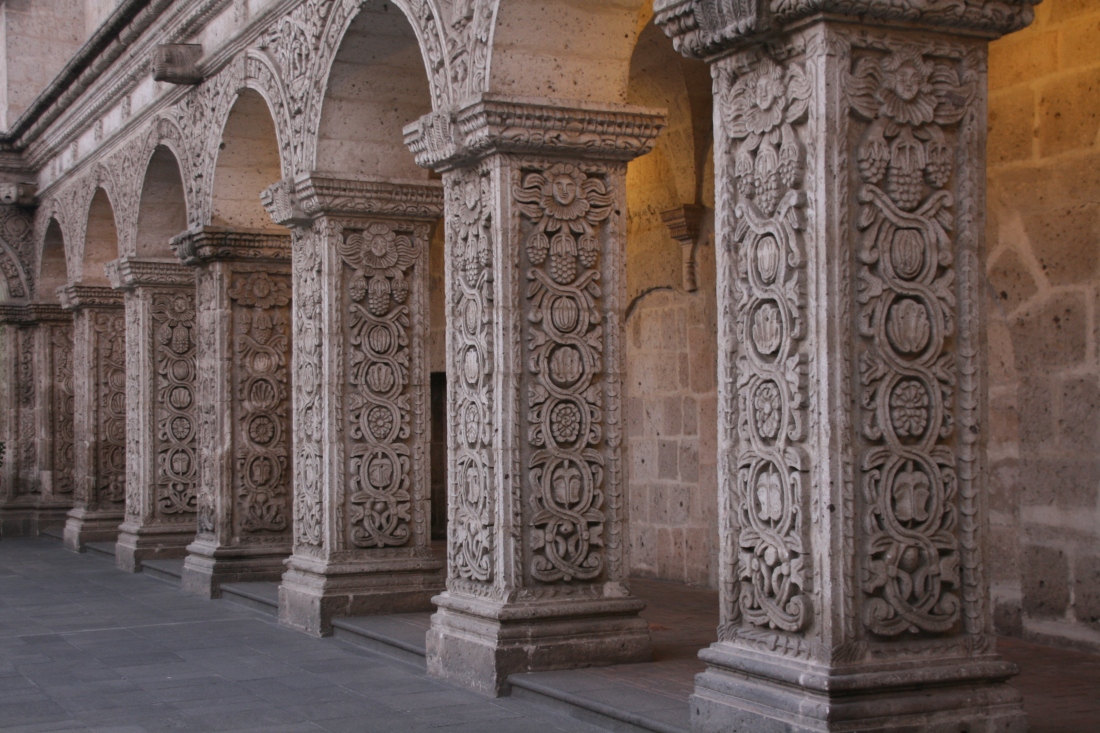 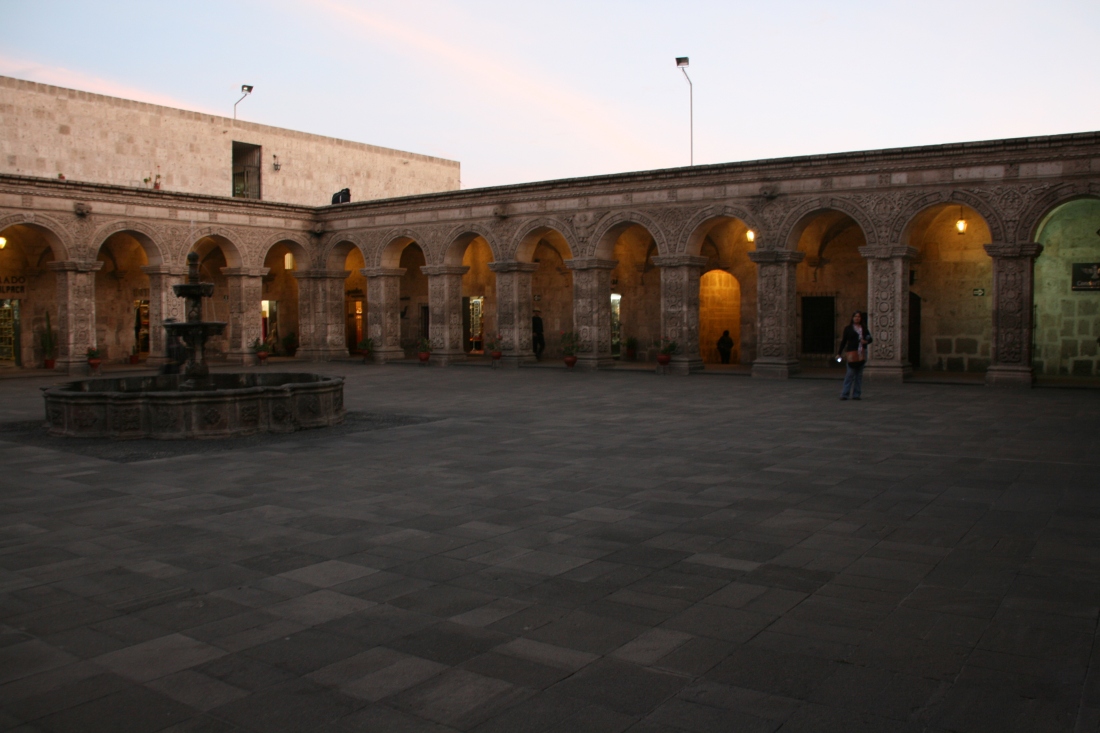 When we got home, Max & Lula were still awake, and were ready to give us our welcome drinks ! We all gathered in the kitchen, as Max showed us how to prepare Pisco Sour (a can of coke for Jilly). Over 2 servings of Pisco Sour, and about 2 hours of lively conversation, our topic had gone from Picolito (their dog), to Peruvian Food, to Filipino Food, to Peruvian Government, and a bit of history of some things.

Oh, one other reason why Arequipa is named the White City, apparently is by the overwhelming ratio of ¨whites¨who live here… whites, being the direct descendants of the Spaniards, and the topmost level in Peru´s socio economic class, the ¨mixed¨aka meztisos being in the middle, and the Indians being at the bottom. We´ve had a lot of observations on these as well, but that would mean another long story.

Cayma (where we were staying) and Yanahuara and quiet residential neighborhoods outside of the city center. No travel agency offices, no currency exchange centers, just the normal panaderias, pharmacies, and stores for the residents. We left the house are around noon, and started walking down the streets of Cayma heading to Yanahuara’s lookout point at the main plaza. The plaza, as you guessed it, has a colonial-looking church on it and a long structure with arches on one side. Looking through the arches, you will get a splendid view of the towering El Misti volcano, and the whole of Areuipa. We spent a few minutes just hanging around and taking pictures. After a brief moment inside the church for some prayers, we asked for directions to the Sol de Mayo restaurant. 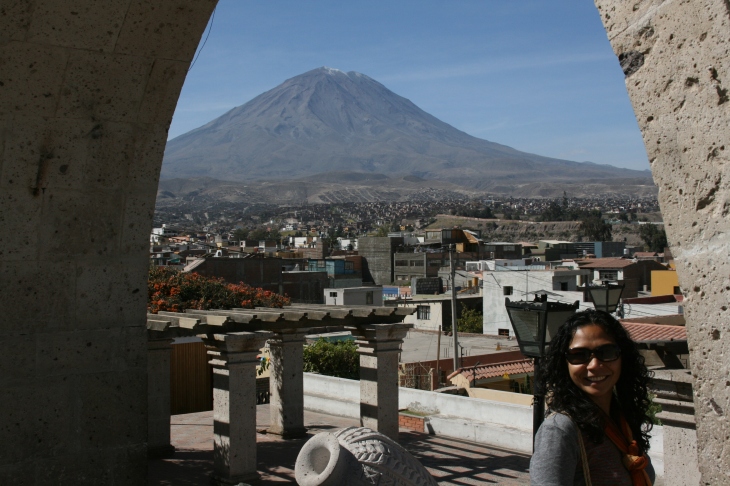 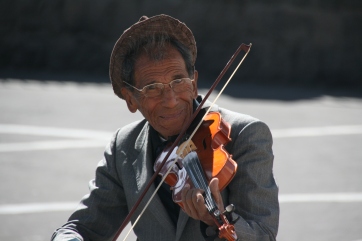 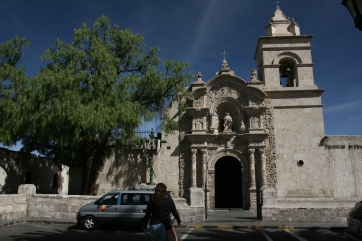 The restaurant was only a couple of blocks away from the plaza. It is tucked behind a tall dark red wall, and in a quaint colonial inspired (surprise!) structure, with a small courtyard in the middle, and a veranda all around it. We chose to dine al fresco at the courtyard-garden, right in front of a band. As the music rolled, we browsed through the menu and decided on chupe de camarones, cuy chactado, rocoto relleno, cevice mixta and of course, rice. Chupe de camarones is made of fresh water shrimp (which actually looks like supersized crawfish) in a creamy sauce (which reminds me of ginataang shrimp, but not that creamy) mixed with a huge chunk of squash (with the peel on) and a chunk of corn , still on the cob. The dish was wonderful ! I’d be happy with just it’s sauce on rice =). Cuy chactado is fried guinea pig – yes the whole thing, fried, with head and tail – like a tiny lechon. The cuy tastes like chicken.. well, tastier .. more like cornish hen, but with a little bit of an aftertaste.. but a nice one. The crispy skin was to-die-for :D. Rocoto Relleno is sweet bell pepper stuffed with ground meat, cooked in some creamy concoction of spices, and served with thinly-sliced potatoes twice-baked. It was delicious, though a bit too spicy for me so I only had a taste of it. Arequipaños are known for spicy food and Maridol loves it ! The ceviche … ahh … what can I say. Mixed raw fish, octopus, scallops, sea cucumber, shrimp, slow cooked in lime juice, served with baked camote (sweet potato) on the side. For all of these, we paid about $35. Can’t beat that ! Note though that this is because we were on a residential neighborhood and not in the city center. You won’t get the same food for this price near the main plaza. 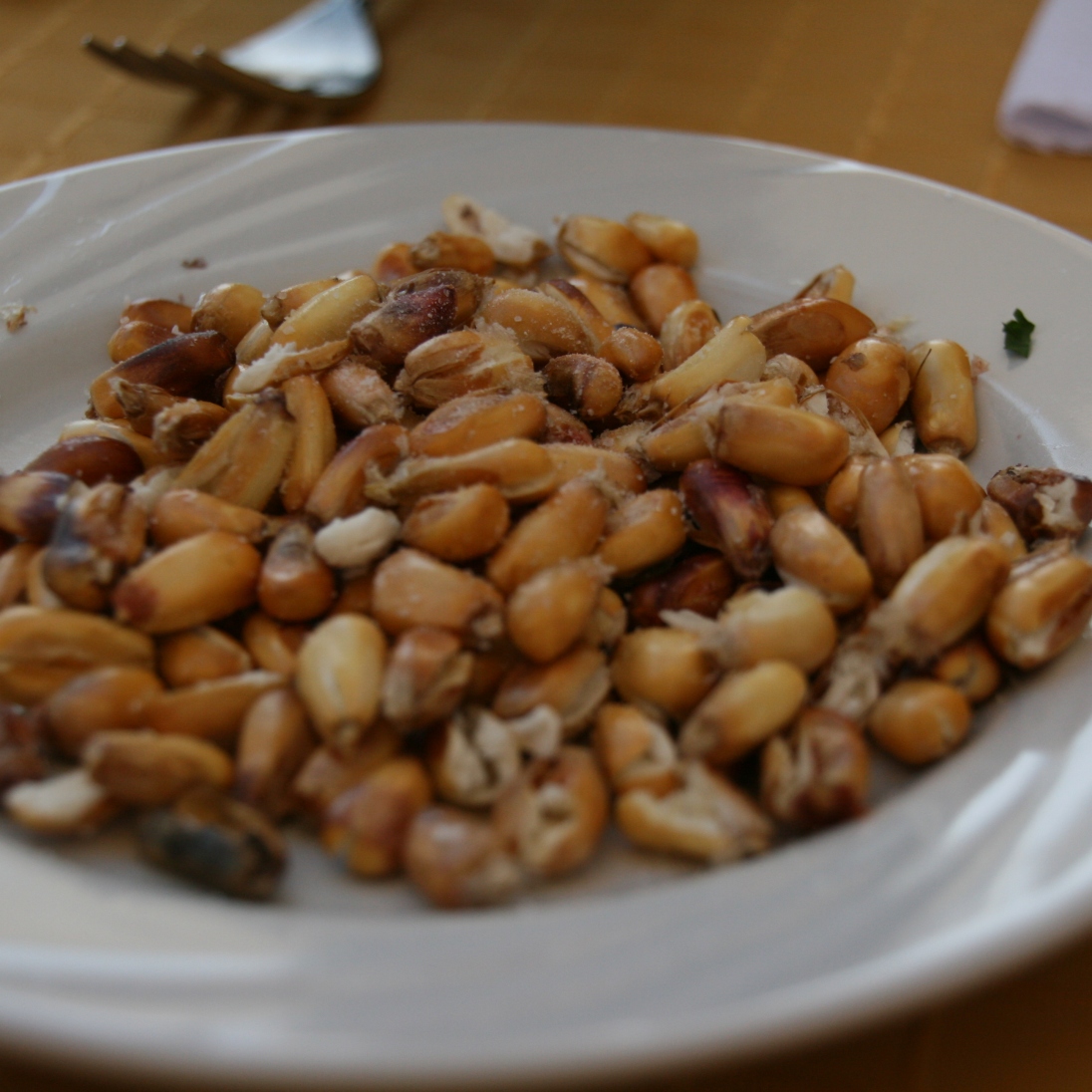 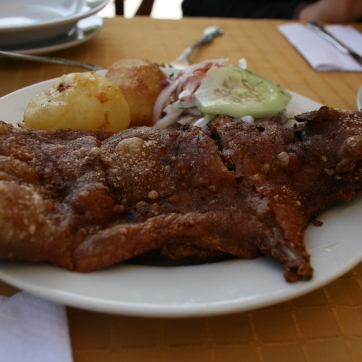 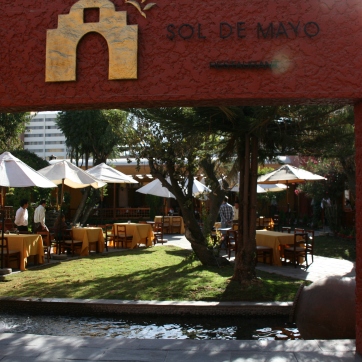 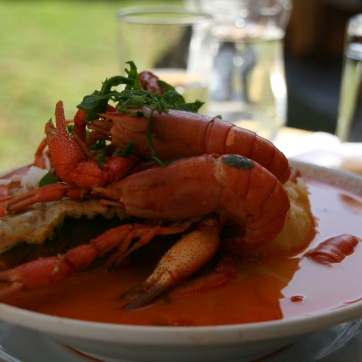 Our taste buds happy, we took a cab to the museum to see the Ice Maiden. In Arequipa, taxicabs don´t have meters. Everyone knows how much to pay to go anywhere in Arequipa, which is 3 soles ($1). Ain’t that great ? no haggling with cab drivers !

So then we went to Museo Santuario de Sta Maria (I think that’s what it was called). The Ice Maiden, Juanita, was discovered in 1995, more than 500 years after she was buried .. or rather, sacrificed by the Incas. Buried in the snowy summit of the Ampato mountain, the extreme temperature preserved her body, including her insides. She was believed to be sacrificed to the gods during one of the Incan religious ceremonies which is performed every 4-7 years, during the El Niño. Since the discovery of Juanita, there are now 14 children discovered in the mountains of Peru, and 4 in Chile. The museum had all the other offerings buried alongside the bodies of the children, and the guide explained to us each and every one. Jilly just studied the Incas in the past semester so she knew some of the artifacts and what they meant. I know that the whole sacrificial concept sounds so wrong, but taking aside everything that we know now, I found the Incan civilization and everything they left us very fascinating. At the dnf ot he tour, we saw Juanita, crouched in a semi-fetal position (because she fell from her burial site to the crater before she was discovered). the fall also destroyed the covering from her face which left her face exposed to the sun, leaving her face and lips dehydrated. Everything else is intact, as she lay frozen in a small glass box. She was believed to be around 12-14 yrs old.

The sun started to set as we walked around the plaza once more, checked more souvenir shops, stopped for light dinner until it got dark and we headed home. The next day will take us higher into the Andes, at 12,500ft to the city of Puno.