On our first day, as we try to get our bearings in this city, we wandered the Palermo neighborhood. It’s such a delight combing the streets of this neighborhood – lined with tall leafy trees, littered with many small charming restaurants, bars, cervezerias, parrillas, most of them with tables and chairs out in the sidewalk.

First thing we learned is how to order coffee. Un café is an espresso, jarrito is double shot espresso, cortado is double shot with a bit of steamed milk. Cafe con leche is the classic espresso with milk (say coffee + medialunas?). We also learned that dinner doesn’t start til 9pm. I guess our bedtime here will have to adjust. Bars don’t even open until past 7or so, restaurants open about 8pm. Our first dinner was at this small unassuming place called The Gran Dabbang, owned by apparently a well known chef in the food scene here. They serve fusion of Indian, Southeast Asian and Paraguayan dishes. We overindulged and ate more than we should, even ordered another serving of the tapioca flour bread in chutney dip. The flavors were just heavenly! And oh, the lamb curry came with a sort of pickled sweet coconut flakes – think “bukayo” with a hint of sourness. My taste buds were dancing with joy as we walked out of the restaurant. 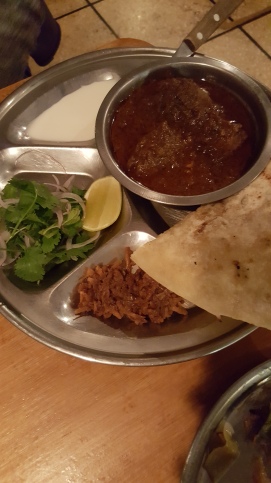 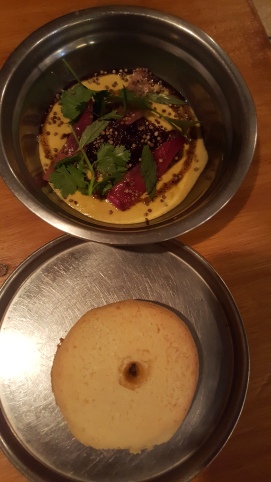 The Palermo neighborhood is further divided into sub neighborhoods, called Palermo Viejo, Palermo Soho and Palermo Hollywood.  I would say we were maybe a street or two away from the heart of Palermo Soho where there’s a large concentration of bars and restaurants.   The streets of Palermo Soho comes alive at night with bar tables overflowing into the sidewalk and on weekends, some streets turn into a market of miscellaneous crafts and wares.

On Sunday, we took the Subte (Buenos Aires’ underground metro system) and headed to the San Telmo Feria, a notable weekly event in one of the oldest neighborhoods of Buenos Aires. It is basically a huge street fair and market that spans several streets and centered around Plaza Dorrego.  We elbowed our way through the crowds as we try to check out all the vendors selling all sorts of stuff, from paintings to brass trinkets to mate gourd and bombilla, to antiques and antique-looking stuff, basically anything anyone can sell. As we fight our way through the crowds on the street, we came upon marionettes, Carlos Gardell impersonators, a guy playing guitar, and what I’ve been looking forward to:   tango right in the heart of Plaza Dorrego. It was fascinating to watch couples glide gracefully in the makeshift stage in the plaza. I watched in awe, smiling the entire time. The way the woman swivels her hips, those flicks she does with her feet, her posture, her shoes, her heels, her hair in a bun, the way her dress hugged her body, just about every little detail in a tango dancer exudes elegance. My finger never left my camera shutter, I wanted to capture everything in my photos, switching between my camera and my phone. 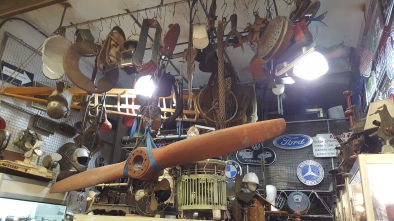 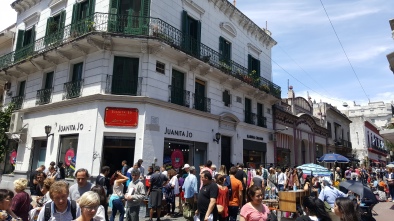 After lunch we wanted some break from the crowds of the feria, we walked towards the Buenos Aires Museum of Modern Art (MAMBA), but somehow did a swift detour to a dulce de leche store.  Nah, it wasn’t an accident. I felt like I was walking in the clouds with a halo in my head singing hallelujah (and drooling).   I had to restrain myself from buying a bus load of jars to carry home.  I did manage to get a few boxes of alfajores and jars of dulce de leche.  Oh yeah, we were heading to the museum. Inside the museum was a really interesting installation by an Argentinian artist, Tomas Saraceno. It was a giant web installation in a big room with flood lights strategically placed to highlight the webs.  The artist used 7,000 spiders which took 2.5 months spinning webs in the gallery. 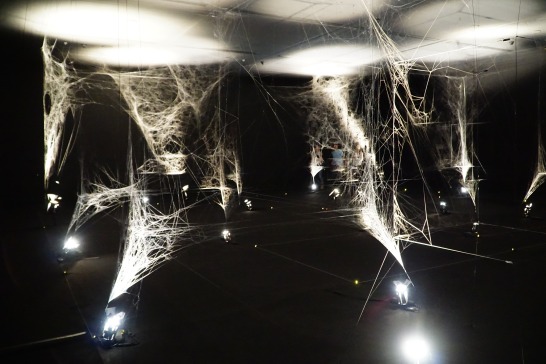 This day happens to be hubby’s birthday and we thought this was the best time to have an Argentine steak. After all, we can’t leave Argentina without having tried one of the things they’re known for (aside from Coke+Fernet.. and dulce de leche.. and alfajores… and medialunas).  Based on travel books and websites, and having been on Latin America’s top 50 restaurants, we decided to have hubby’s birthday steak dinner at La Cabrera. Both of us not being experts on steaks and not really heavy meat-eaters, we studied the menu and ordered items that had the smallest number next to them, the numbers representing the weight or size of the steak.  The numbers being in metric system didn’t help us either so we just opted for what we thought were the smallest portions. Suffice to say, the small portions were still enough to feed a city! 🙂

The next day brought us to some other interesting places in the city. Our first stop was El Ateneo Grand Splendid, an old theater which now houses on of the most beautiful bookstores in the world. 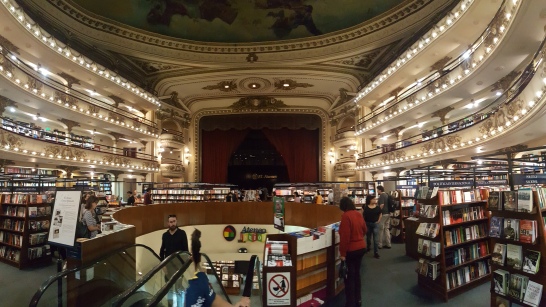 Then we headed to Casa Rosada. I wished it was a Thursday and I would’ve personally seen the Madres de Plaza de Mayo, but the plaza was empty besides the sculptures of the scarves worn by the mourning mothers.  I can only (or maybe cannot, really) imagine the despair all these mothers had to go through when I looked at their monument in front of the presidential palace . These mothers had one thing in common – they all have at least one child who had “disappeared” during the military dictatorship in Argentina (abducted, tortured, flung into sea or into unmarked graves). They started marching in protest in 1977 and had demanded to know what happened to their children. Ever since then, every Thursday – to this day, the mothers (wearing white scarves over their heads) march in front of Casa Rosada.  We sat in the plaza for a few minutes until we decided it was time to head to Recoleta. 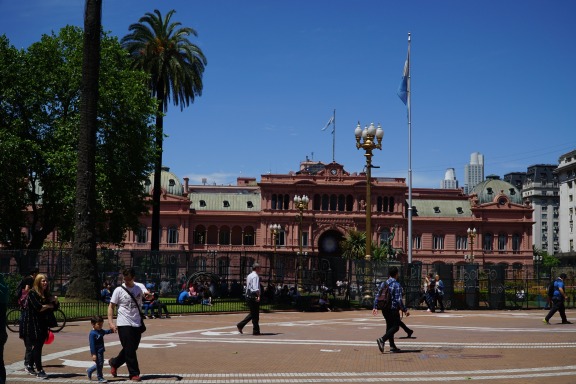 Maybe it was just a little too fitting that we spent the Eve of All Souls Day at La Recoleta. This cemetery lives up to its name, called as one of the world’s most beautiful cemeteries. The sculptures on the mausoleums are so elaborate your think you’re in an open air museum.  Sometimes I get creeped out by cemeteries but this one just left me with admiration . I was particularly drawn to the size and details of the angels’ wings and the faces of weeping mother’s or angels – I can almost feel them mourning. We spent so much time going from one row to another until the guards told us it’s almost closing time – and only then we realized we havent even seen Eva Peron’s tomb. So we quickly dashed to the Familia Duarte location and asked the guard for one extra minute to take some pictures. The Familia Duarte’s resting place is a very simple one, but full of fresh flowers from visitors. People must really love Evita. 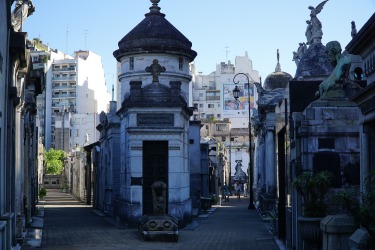 We felt like we didnt have enough of Recolata, so the next day we went back. However by the time we got to the cemetery it was almost noon, the sun being at its peak, and there were several groups of students on a tour so it wasn’t an ideal time for taking photos.  We decided maybe a thousand photos of angels were enough anyway so we’d just explore a different part of the city instead. We sat at a park and watched people (and lots of dog walkers!) go by while we ate the sandwiches we got from a nearby deli. Tummies full, we were once again ready for more of this city and so we headed to the Museo de Bellas Artes. Lucky for us, at that time the museum houses a Joan Miro exhibit.

One of the things I loved about BA is the abundance of trees and parks within the city! I will forever think of this city whenever I see a jacaranda tree. We must have just missed it’s season by a few weeks but I still see some trees with some flowers still left in them but I can just imagine when they are in full bloom and it turns the city into one big gorgeous purple landscape. It’s the start of spring season so the leaves are all just starting to sprout (replacing the flowers?) but just imagine them in the summer! I am not exaggerating when I say there’s jacaranda tree wherever I look. Streets are lined with these tall (as in about 9-story-building-tall) leafy shady trees that makes walking such a treat! There are also many parks within the city and they are full of trees – like mini forests – even if they are only one city block.. The trees seem to be well groomed so their branches all spread out beautifully, even those that line freeways. We walked and walked and walked until our feet hurt.  We stopped by a Japanese garden but there wasn’t really much in it. We appreciated the time to just sit and rest our feet though, before we started walking again all the way back to our hotel.

After resting for a bit, for our last night, we went back to Palermo Soho, got a couple of beers from a bar and walked around trying to decide where to eat dinner.  We ended up going back (for the second time) to Chori, a small sausage stand that gets packed every night. We got our own chori-pans, basically a sausage sandwich which had been the new craze in the foodie circle in Buenos Aires.  What used to be just a staple at football games got it’s gourmet make over and now comes in different combinations of sauces and fixings. 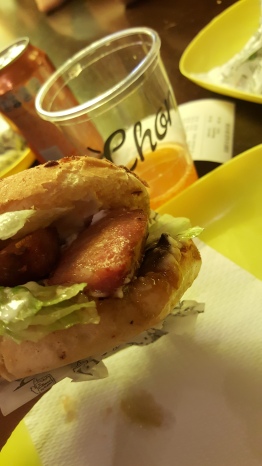 One thought on “Buenos Aires”