Alfama.  Per  instructions from an email that I got from Hear & Soul Lisbon, our taxi dropped us off in front of the Fado Museum, at Largo Chafariz de Dentro, a small dimly lit cobble stoned plaza, surrounded by little tascas (taverns) with scattered empty outdoor tables and chairs.  It was already dark, a little chilly but pleasant, and we have no idea where we were.  I was told Carla would be meeting us there and would walk us into our apartment since cars are not allowed where we are going.  As we started walking, we realized why.  It was like stepping back in time, as we started walking through winding narrow stone alleyways, lit by wrought iron lanterns hanging on tall narrow buildings. Carla kept apologizing for the stairways as we struggle with our luggages through uneven stone steps (escadinhas) which would lead to a small stone landing area, which leads to more stone steps.  We walked up steep alleys, turned, walked up more stone steps until we reached a narrow door to where she finally held out the keys and showed us our home for the next 4 days. 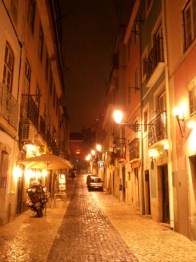 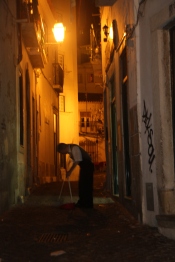 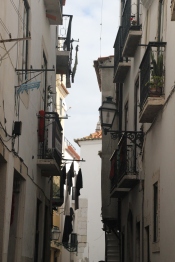 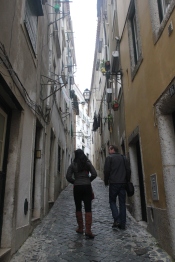 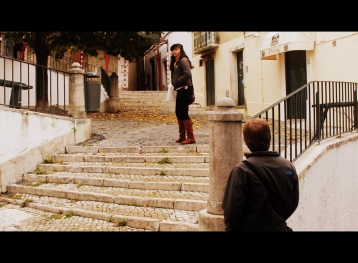 That was our introduction to Lisbon.  Everything about out first hour in Alfama was magical.  Thrilled about our tiny 2-bedroom apartment, we dropped our bags down, and decided to explore our little neighborhood.  Alfama is the old quarter of Lisbon,  built in the 7th century AD and survived the big 1755 earthquake which brought Lisbon to poverty.  This quarter  would definitely take you back in time.  Being off-season, there weren’t a lot of people and the entire place is relatively quiet. We headed to Rua Remedios where there still seems to be places that are still lit open.  Walking up this alley, we found old and dilapidated buildings, most part covered in tiles, small verandas, with clothes out hung for drying.   Several taverns are still open, with men dressed in coats and women in lacey shawls just hanging about outside the door.  Hand made signs, mostly of chalkboards, hang by the door that says “Fado Todos Os Noites” or “Fado Tonight”.  We walked farther and we started hearing crescendoing voice of fadistas accompanied by a guitar.  We were right at the very place where Fado was born.  There’s fado everywhere. We hear a women’s voice, then a few steps further, a man’s voice, all coming from tiny taverns which holds no more than 10 small tables.  Filled with excitement, we made a small circle and found our way back to our apartment.

For the next four nights, we wandered farther up and down the alleys of Alfama, found where the butcher shop is, the fish monger and the bakeries.  We watched as older men and women lean out of their windows from their home 2 or 3 stories up and start a conversation to someone passing by, locals hanging their laundry to dry at the end of the day and taking out their trash and leaving them out by the door to be picked up nightly.  In the mornings, we’d go to a bakery nearby and have our morning café com leite  and pastries as we sat in one of four kitchen tables inside.  We watched locals stop by the bakery on their way to work, stand by the pastry counter, flip a few pages of the newspaper while sipping their morning bica (espresso) and leave.  The owner  would have a talk show blaring on the radio or a soccer match playing on tv. 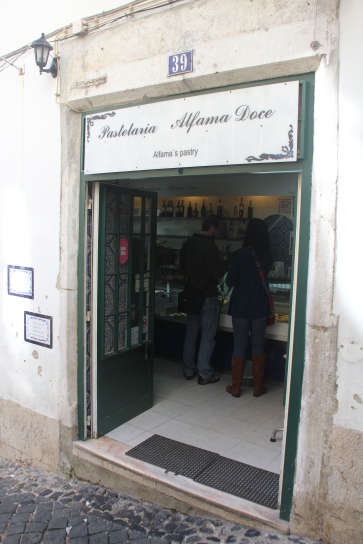 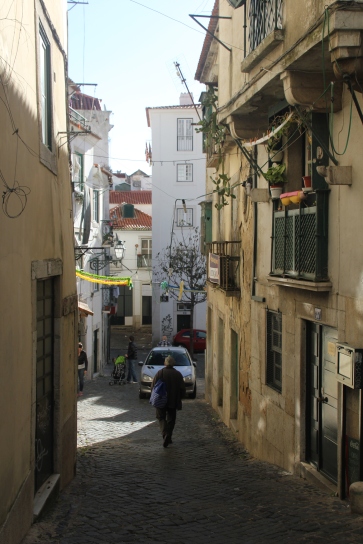 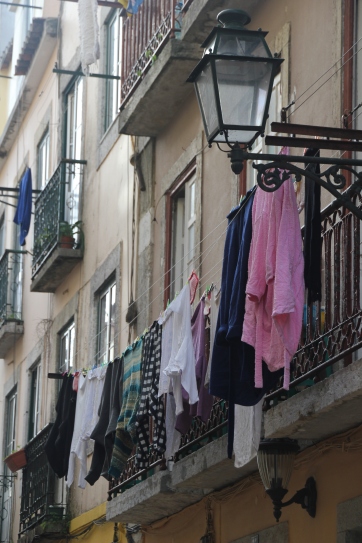 On weekends, locals stay longer at the bakeries for some chit chat, which to me sounded more like a very passionate conversation bordering on arguments.  They all know each other and seem to be talking about something rather serious.  I’m pretty sure they are not just talking about the weather, but later I noticed that that’s just how they are.  They love talking to everyone and they can maintain conversations for quite a while.  Another thing we noticed is that every bakery/pastelaria/padaria we’ve seen always has a cabinet full of liquors.  I guess they are bakery in the mornings, and double up as bars after breakfast ? or if the espresso isn’t strong enough maybe adding a shot of brandy will do the trick.

Coffee. Lisboetas are crazy about coffee, or actually, espresso.  If you order a café (ka-fey) you’ll get an espresso. You can tell we were tourists because we were the only ones drinking coffee in a bigger cup, and by bigger I mean just a tad bigger than a thimble.  Every place has an espresso maker, be it a bakery, restaurant, market, grocery (so you can take a sip while doing your grocery shopping), train station, bus station, vending machines.  No one makes coffee in big 10-cup pots like what I have at home, they are all about espresso.  And I have to say, every espresso we’ve had is darn good.  So good I basically ended my 2 year caffeine-free stint just like that.  I was afraid ordering a decaf would give me raised eyebrows, and I also didn’t know how to say decaf in Portuguese.  So there I was, having my daily café com leite, until few days later when my stomach acids decided they’ve had enough and I finally had to swallow my pride and get deiscafinado café com leite.

Fado.  There’s a Portuguese word that cannot be translated in any other language. Saudade.  It’s the longing for someone or something that was once there, feeling the love that remains.  All these emotions expressed through music, is Fado.   Considered as a UNESCO Immaterial Heritage, this music is mostly about Saudade,  of unrealized dreams, broken heart, sentiments conveyed through the voice and not the lyrics.  Women fadistas wear black shawls with their name embroidered into it, and men wear white shirts and black coats, as they exaggerate every emotion that they have into the song.  In contrast to the big fado clubs with well known fadistas, we went to a fado in a small tavern in the Alfama district and loved it. Jilian almost fell asleep though.

Food.  One of the most popular dish in Portugal is Bacalhau (cod fish) cooked in different ways.  They say that the Portuguese has 365 ways to cook Bacalhau, one for each day of the year.  We’ve tried a few.  Jilian’s favorite is the Bacalhau a Bras, shreds of salted bacalhau, some potato and eggs.  Some other dishes that we liked were Bacalhau gratinado, grilled sardines, salmon, cabbage soup, Portuguese sausages, and varying stews.  One evening we were lost and trying to find our way back to Alfama, we were tired and needed to rest and passed by this cool little café tucked in a small cul de sac as we rounded a corner.  We decided to have some petiscos (Portuguese tapas) and had some of the best food we’ve had in Lisbon.  It was so good we traced back our route and went back to that café for lunch the next day. We had some Brazilian dishes, all of which are delicious and I can only remember the name of one – feijao tropeiro. 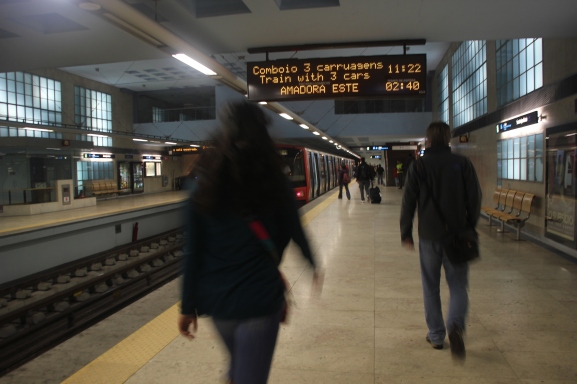 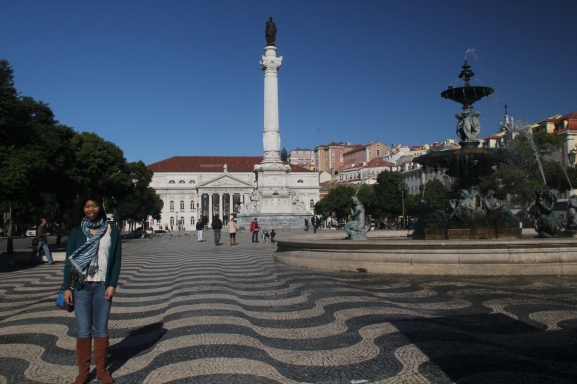 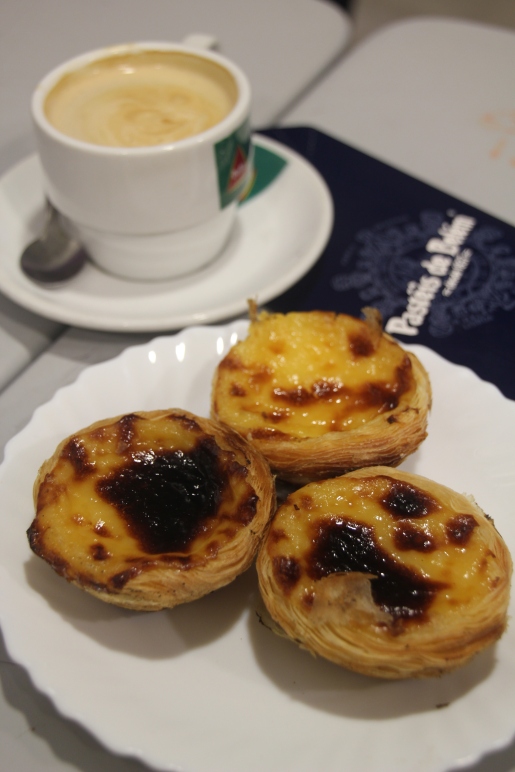 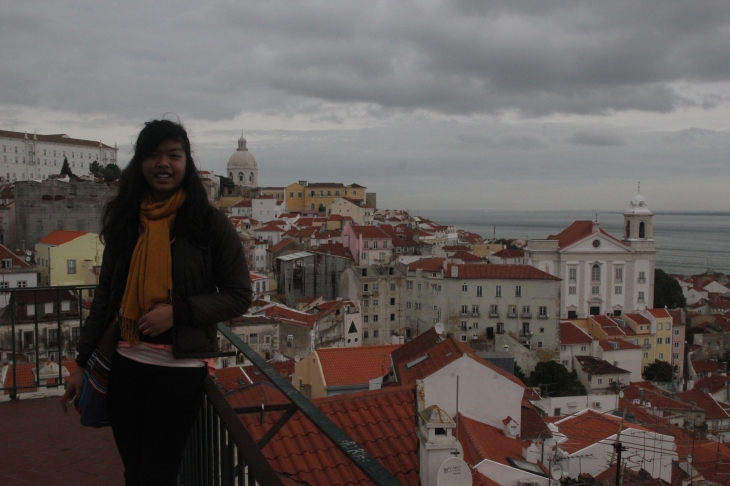 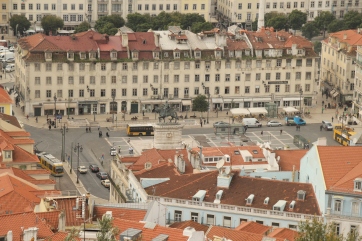 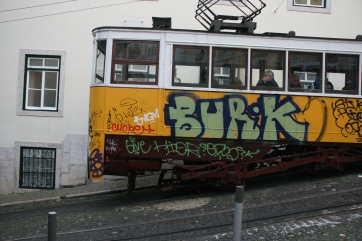