After 2.5 days of wandering the streets of Valpo, and having crossed off all the streets in Cerros Concepcion, Allegre, parts of Carcel and Bellavista from our map, we thought – what should we do tomorrow.? Should we rent a car and go to the wineries? but if husband’s driving then he can’t drink.. I don’t want to drive … and I can’t drink. Maybe something else then. Go visit Isla Negra & La Sebastiana, Pablo Neruda’s 2 other houses … or … there’s this other hill in Valpo that I’ve been so curious about. It’s called Cerro Polanco. Not much is written about it except one small box in the lonely planet book. It says there was a graffiti festival in 2012 that was held here, and in just a matter of few days, street artists from all over Latin America bombed the hill with murals. Then nothing else ! It’s like wetting your appetite but not letting you eat! I kept searching and found a few blogs – not much – and bunch of trip advisor reviews that all says be careful when you go this neighborhood. At the minimum, everyone raves about the only vertical ascensor in all of Valpo. I thought, if there was a graffiti festival there how come we don’t hear much about it? Well, there was only one way to find out. That’s it – we are checking out this hill.

Next day, as we were talking to our hotel receptionist about something else, we’ve mentioned we’re heading to Cerro Polanco that day. She gasped and said please.. please… please… be very very careful. We thought, are we going to some war zone here? Sheez, some tripadvisor reviewers even just went up the ascensor, took pictures of the views, then went down. Some says go up the ascensor but dont cross the bridge to the neighborhood. Anyhow, that didn’t faze us, so we went, took a cab and told the cab driver to take us to the ascensor polanco – that’s all I know, and we’ll take it from there.

There was a tunnel that leads to the ascensor – true enough, like what reviews had said, it’s pretty cool. Cool, temperature wise (its like being inside a mine tunnel) and cool, vibe wise. You can hear water dripping, and its slightly lit by dancing neon lights. The ascensor was just like an elevator (think Elevador Lacerda in Salvador, Brazil or Elevador de Sta Justa in Lisbon). Once you are up – it gives you a 360 view of the city. Then you go through what looks like a hanging bridge that connects the vertical lift to the streets. 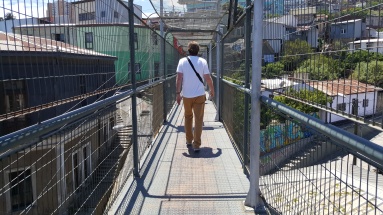 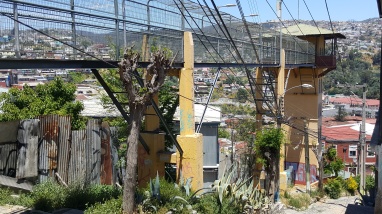 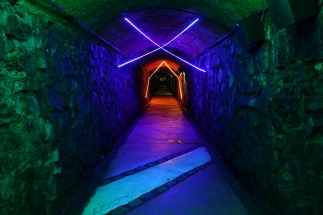 We checked out the surrounding streets. We were on the top of the hill. It was quiet, almost too quiet – a normal weekday in the neighborhood I guess. It’s definitely not where tourists go, there weren’t any meandering the streets. We walked up a street, a couple of middle aged men working in their driveway, I nodded to them and muttered Buenas, a bus passing by, a lady on her way to the market, an old man sweeping the front of his house, not much. Saw one or 2 walls with murals, but definitely not what we were looking for. 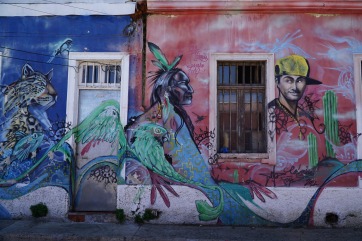 We looked at the other streets in other directions and decided to walk down the hill, along the street called Almirante Simpson. That’s when we saw all the murals and we thought ok this is the right place. A few men sitting on the sidewalk having some morning chitchat threw some glances at us, but they didn’t seem to mind us taking pictures. It feels strange though because we knew they were someone else’s houses but I’m hoping they, too, don’t mind. 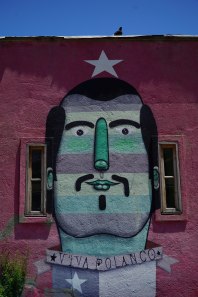 There were steep stairs that go down the hill and alleys branch off from these stairs. As we went down those stairs, the alleys and streets seemed busier. There was a nearby school and moms were waiting outside, a little girl getting her popsicle from a corner mini market, a bunch of high school kids still in their uniform huddled in a corner smoking, some ladies going over the day’s stories while seated on their front steps – and these 2 camera-toting tourists snapping away photos of walls.

It all turned out well, I didn’t feel unsafe. We found several cool murals, most of them undisturbed. I was glad to have seen another cerro in this colorful port city. The wineries and coast will have to be another day (and another post

So if you’re ever in Valpo – go check out Cerro Polanco!