On our last day in Valparaiso, we rented a car and had planned to drive up the coast and check out the coastal towns north of Valpo. One thing I noted, the weather in Valpo is VERY MUCH like the bay area. It’s late spring/early summer over there so once in a while they get clear blue skies all day but most of the time it’s foggy in the morning, and the fog burns off around noon. They get a few hours of sun (unless it’s a cloudy day), then back to cloudy later in the day. Fortunately, that day was the ‘once in a while’ clear-blue-skies-all-day-long kind of day, perfect for driving up the coast!

The most stressful part of the day was renting the car since no one spoke English in the rental car office and I speak/understsand very little Spanish. I’m telling ya, that struggle was real (:P). I was told there’s only one rental car company in Valparaiso, and the rest is in Vina del Mar.  The rental car company is called Rosselot and the office is a mix of showroom, sales, and a table that deals with rentals.   The guy was very helpful, and there wasn’t a lot of fuss, even though in the end he had to type an entire sentence in google translate just so we can finally understand what he was talking about :).  In the end, it’s always a fun experience trying to understand a different language and everything went well. We understood the more important parts – how much it cost, when to return, unlimited miles, car takes diesel, etc.

Some parts of the coast of this part of Chile reminds us so much of highway 1 here in Northern California. The highway that hugs the hillside that gives you an amazing view of a rugged craggy coast as you make a turn, a wide beach with surfers riding waves, or mansions with tall glass windows sitting on a bluff with the ocean right down below. One (big) difference though is that several of the Chilean coastal towns are packed with high rise buildings, mostly holiday condos of rich Santaguinos (and Argentines) . We stopped at Renaca, one of the coastal towns lined with summer condos and a wide beach.  The beaches were still empty, as it was still the end of Spring and the climate was still a bit chilly. 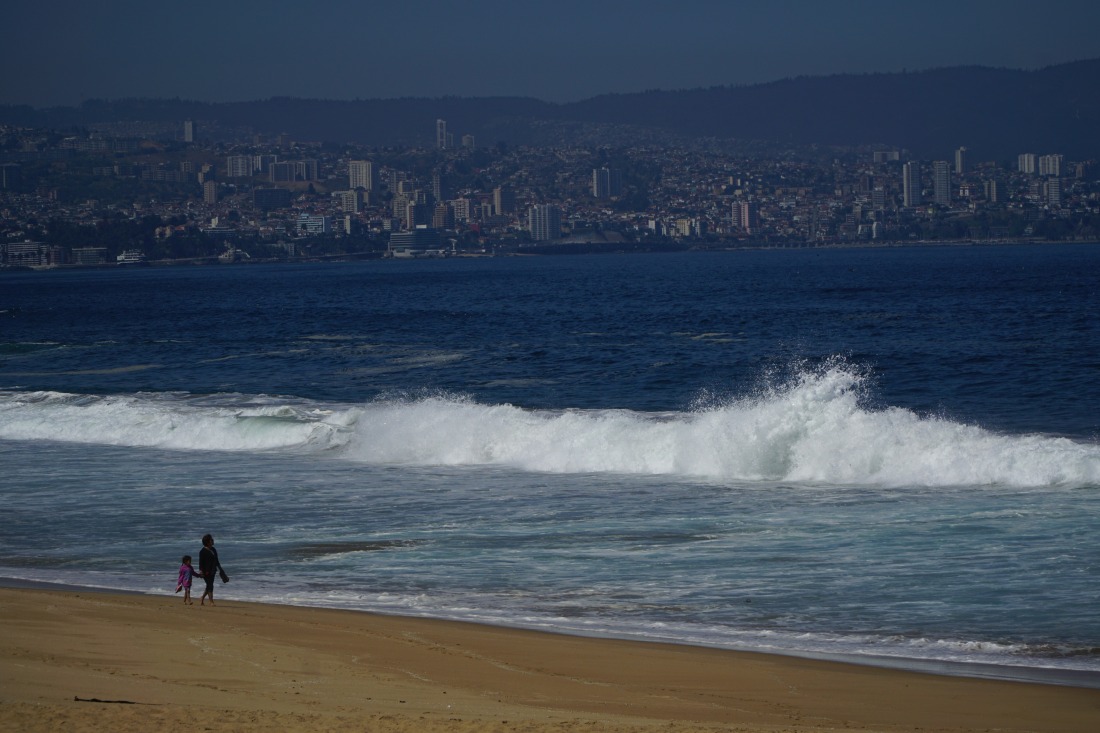 We continued on along Ave. Borgono until we reached a lookout in Concon.  The lookout provides a gorgeous view of the coast lined with the high rise buildings, and waves splashing into craggy rocks.  Right across the lookout we could see sand dunes (dunas de concon).  We wanted to walk on the sand but after driving around in circles trying to find an access path, we gave up and continued driving. 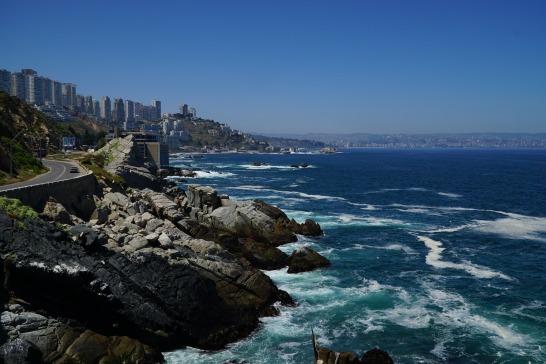 Ave. Borgono continued on to highway F-30-E which sort of veered away from the coast.  The highway was lined with wildflowers in bloom, bright yellow daisies and yellow-orange poppies.

We kept going this highway until we reached our next stop, the small fishing village of Caleta de Horcon, which apparently is where the hippie movement of Chile had began many many years ago.  There wasn’t much activity on the village.  There were fishing boats docked on the beach, and a few people trying to get business by talking us into having lunch in their restaurant.  It was around lunch time, so we decided we should just eat.  There wasn’t much in the village, we took some pictures of the boats, then left. 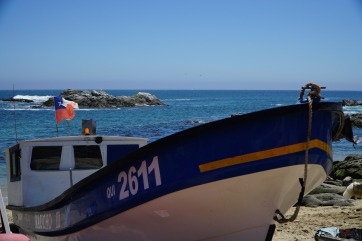 Next on our list was Zapallar.  We passed by some nice wide beaches, and several big modern houses sitting right on the bluff right on the coast.  As we turned off the highway to get to the beach of Zapallar, we immediately noticed how affluent the houses were in this town.  Zapallar is where the elites of Chile buy their holiday mansions.  The beach is probably the best among all the ones we’ve seen. It’s very clean (no dog poop!) and the sand is smoother.  We marveled at the mansions on the hill, and the ones right on the beach, and pretended choosing which one we should buy – should we win the lotto, that is. 🙂

It was getting late in the day,  but we wanted to see one more coastal town, Papudo.  It wasn’t very far north so we continued on. By the time we reached Papudo, the wind started picking up so we didn’t linger long.  By then, a glass of wine in our hotel’s veranda was starting to sound really nice so we decided to end the day and drive back to Valparaiso.

One thought on “Central Chile Coast”